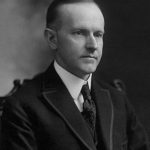 I don’t know that I would have agreed with everything that Calvin Coolidge said. (He was “before my time”. But I agree with him here.

The U.S. Constitution was written for a Nation of immigrants. Our founders contemplated a Nation of different creeds and cultures. They understood that these differences would bring heated conflict and debate. The kind of tensions which have destroyed many other nations.

They, however, designed a framework which channeled these differences into a stronger Nation. A Country where all voices are heard and all men have the opportunity to participate in forging a common outcome. The Constitution elegantly brings us together like no other nation’s founding document. And through the process of finding common ground we make the United States a stronger and better place to live.